If you've never been to Death Valley, we highly encourage you to come a few days before the wedding or stay a few days after and enjoy some of the beauty and biodiversity there is to behold here!

The average high in October in Death Valley is 93 degrees Fahrenheit - so if you plan to hike and explore, bring plenty of water and some sunscreen!! That being said, here are some places to check out while you're here! 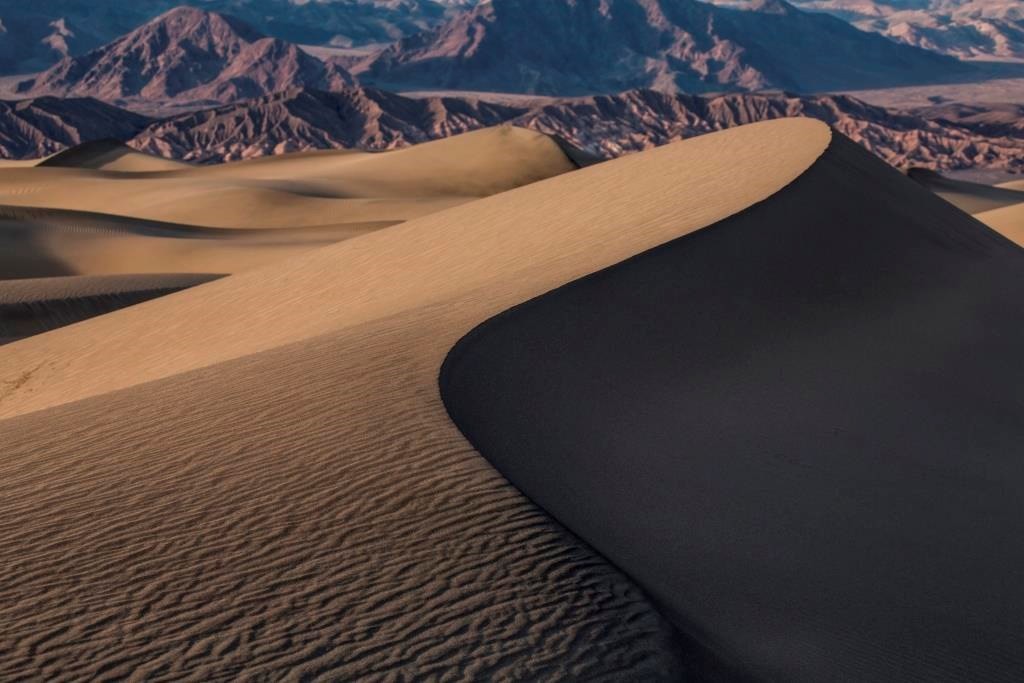 One of our favorite Death Valley locations! When Jared and I first visited Death Valley in late 2019, we spent a day climbing the highest of the sand dunes then running/sliding down. Later that evening, we came back and viewed the stars from the top of one of the dunes - truly magical!

Parking: Paved lot with pull through spaces for buses and large RV's.

Route: The summit of the high dune is 1 mile (1.6km) each way. No formal trail. Of the seven sets of dunes in Death Valley, these are the most famous and accessible. 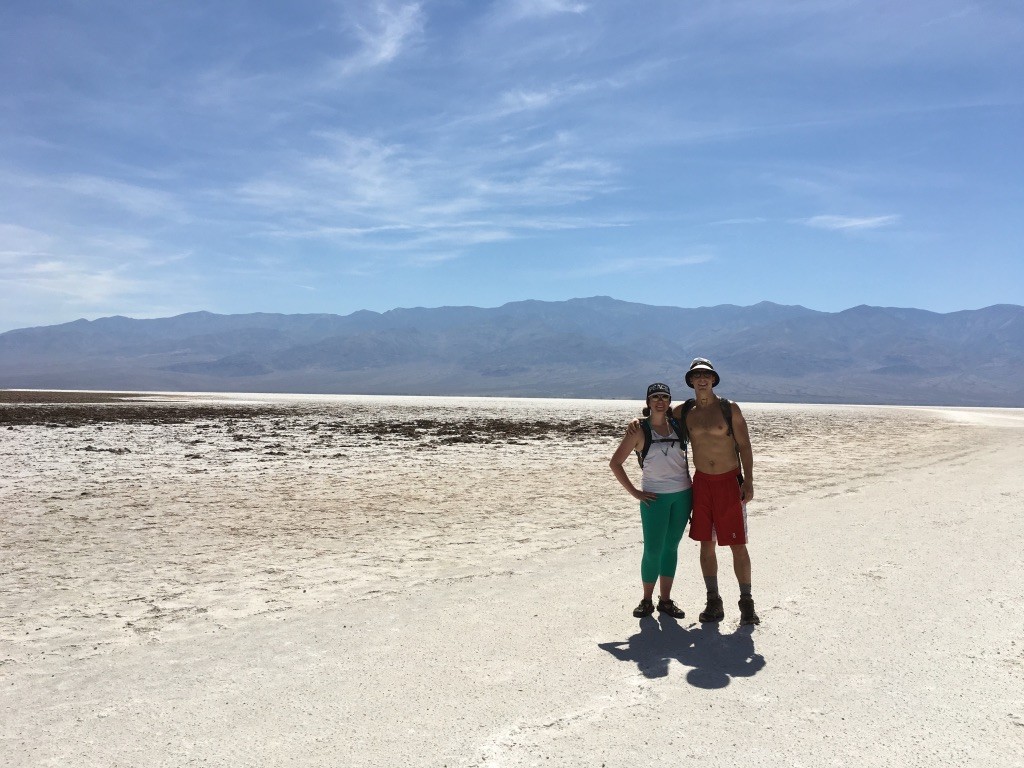 Truly a beautiful place to behold. The lowest point in North America! Pictured here is Caitlin and a good friend, Alex, visiting in June of 2017 - it was 120 degrees Fahrenheit that day!!

Difficulty: Easy to difficult depending on length. It is flat. Do not attempt when it's hot!

Route: The lowest point in North America is a beautiful salt flat covering over 200 square miles (322km) of the valley. ADA accessible ramp leads down to boardwalk. 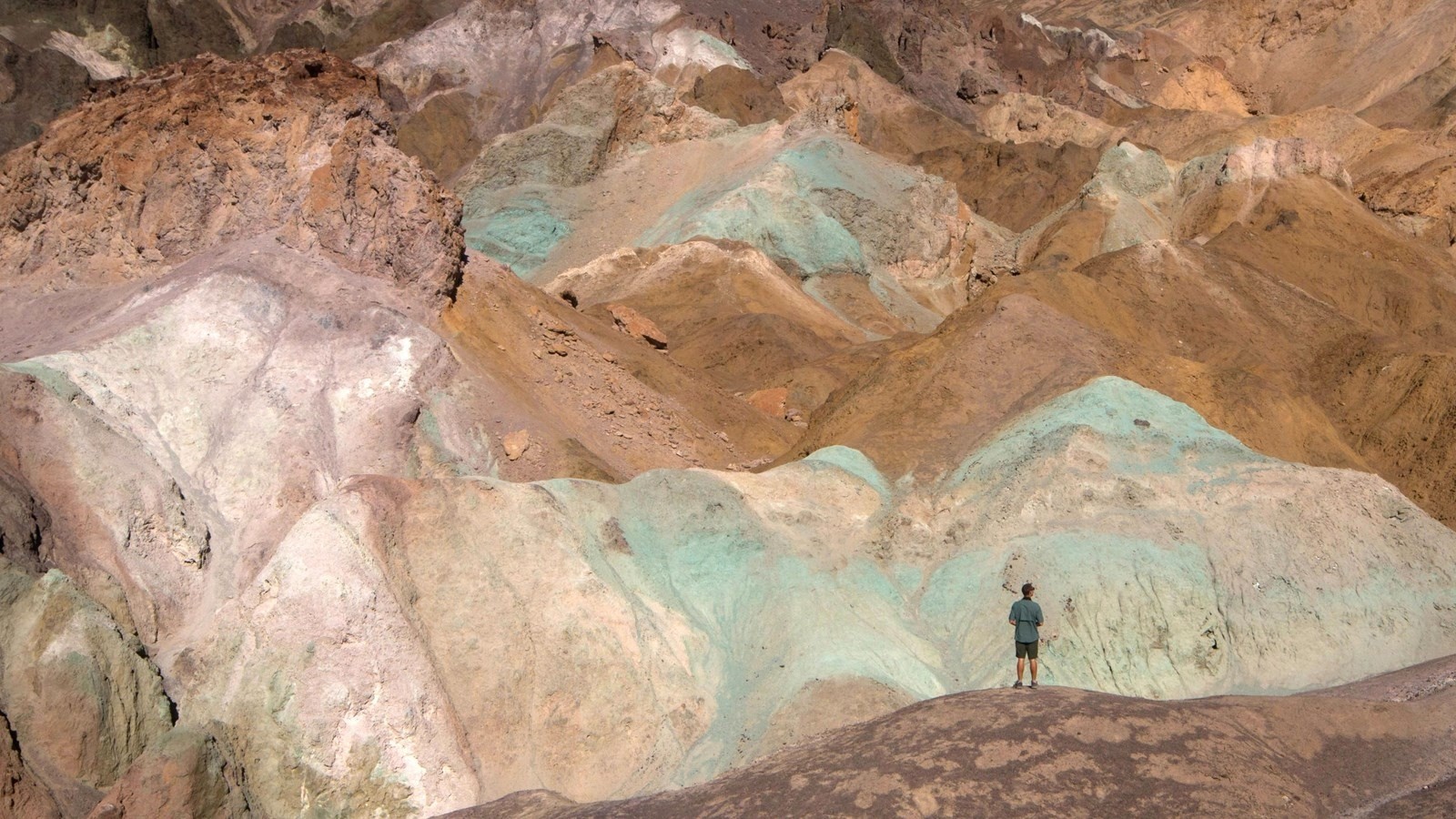 This awesome site can be found along the Artists Drive Scenic Loop. These colors are from volcanic deposits rich in compounds such as iron oxides and chlorite, which creates a rainbow effect. Best time to visit is at sunrise or sunset when changing light bring the colors to life!

(Note: this photo was taken from the Death Valley website and we have no idea who that guy is) 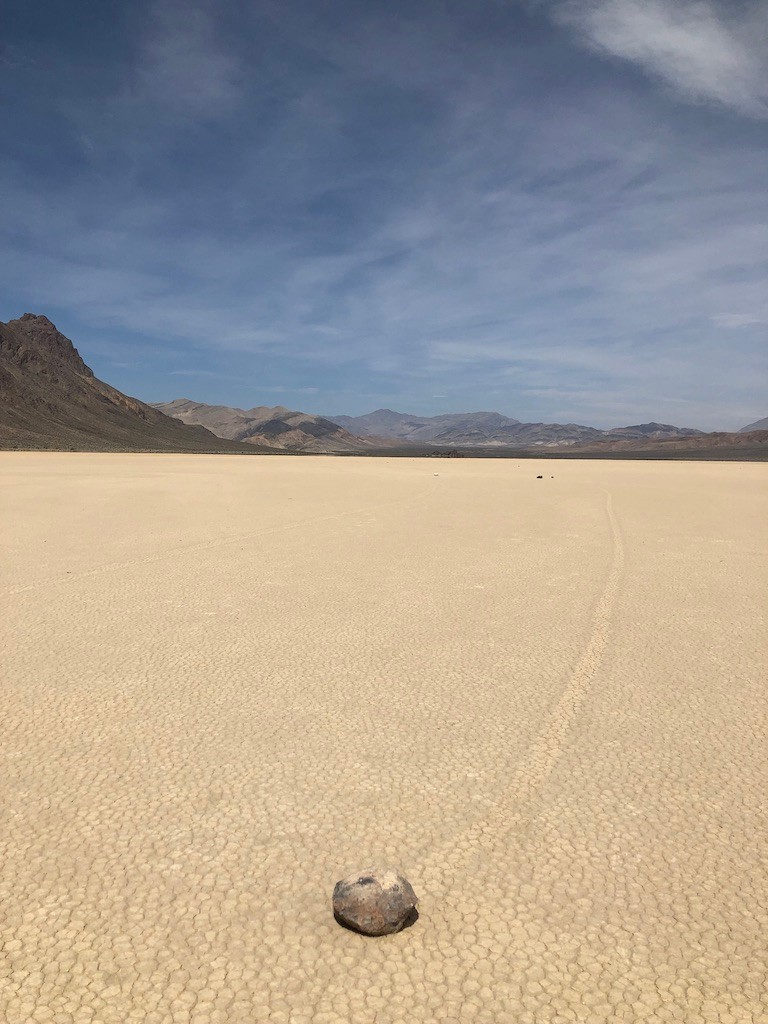 It is a long journey to get to this particular Death Valley attraction and you'll want to have a good off-roading vehicle...but it is worth it! The Racetrack is home to a huge dry lakebed called "the playa" with hundreds of huge boulders littered throughout that seem to have been dragged across the ground, often leaving synchronized trails that can stretch for hundreds of meters. This was a huge mystery for many years! How did they move and leave these trails behind?? From the Death Valley website:

In a new paper published in the August 27, PLOS ONE, a team led by Scripps Institution of Oceanography, UC San Diego, paleobiologist Richard Norris report on first-hand observations of the phenomenon. Because the stones can sit for a decade or more without moving, the researchers did not originally expect to see motion in person. Instead, they decided to monitor the rocks remotely by installing a high-resolution weather station capable of measuring gusts to 1 second intervals and fitting 15 rocks with custom-built, motion-activated GPS units. (The Park Service could not let them use native rocks, so they brought in similar rocks from an outside source.) The experiment was set up in Winter 2011 with permission of the National Park Service. Then –in what Ralph Lorenz of the Applied Physics Laboratory at the Johns Hopkins University, one of the paper's authors, suspected would be "the most boring experiment ever" –they waited for something to happen.

But in December 2013, Norris and co-author James Norris (of Interwoof and Richard's cousin) arrived in Death Valley to discover that the playa was covered with a shallow pond no more than seven centimeters (three inches) deep. Shortly after, the rocks began moving.

"Science sometimes has an element of luck," Richard Norris said. "We expected to wait five or ten years without anything moving, but only two years into the project, we just happened to be there at the right time to see it happen in person."

Their observations show that moving the rocks requires a rare combination of events. First, the playa fills with water, which must be deep enough to allow formation of floating ice during cold winter nights but shallow enough to expose the rocks. As nighttime temperatures plummet, the pond freezes to form sheets of "windowpane" ice, which must be thin enough to move freely but thick enough to maintain strength. On sunny days, the ice begins to melt and break up into large floating panels, which light winds drive across the playa pool. The ice sheets shove rocks in front of them and the moving stones leave trails in the soft mud bed below the pool surface.

"On December 21st, 2013, ice breakup happened just before noon, with popping and cracking sounds coming from all over the frozen pond surface", said Richard Norris. "I said to Jim, 'This is it!'"

These observations were surprising in light of previous models, which had proposed hurricane-force winds, dust devils, slick algal films, or thick sheets of ice as likely contributors to rock motion. Instead, rocks moved under light winds of about 3-5 meters per second (10 miles per hour) and were driven by ice less than 5 millimeters (0.25 inches) –too thin to grip large rocks and lift them off the playa, which several papers had proposed as a mechanism to reduce friction. Further, the rocks moved only a few inches per second (2-6 m/minute), a speed that is almost imperceptible at a distance and without stationary reference points. "It's possible that tourists have actually seen this happening without realizing it," said Jim Norris. "It is really tough to gauge that a rock is in motion if all the rocks around it are also moving".

Individual rocks remained in motion for anywhere from a few seconds to 16 minutes. In one event, the researchers observed that rocks three football fields apart began moving simultaneously and traveled over 60 meters (200 feet) before stopping. Rocks often moved multiple times before reaching their final resting place. The researchers also observed rock-less trails formed by grounding ice panels –features that the Park Service had previously suspected were the result of tourists stealing rocks.

"The last suspected movement was in 2006, and so rocks may move only about one millionth of the time," said Lorenz. "There is also evidence that the frequency of rock movement, which seems to require cold nights to form ice, may have declined since the 1970s due to climate change."

Richard and Jim Norris, and co-author Jib Ray of Interwoof started studying the Racetrack's moving rocks to solve the "public mystery' and set up the "Slithering Stones Research Initiative" ("Science for the fun of it") to engage a wide circle of friends in the effort. They needed the help to repeatedly visit the remote dry lake, quarry rocks for the GPS-instrumented stones, and design the custom-built instrumentation. Ralph Lorenz and Brian Jackson (of the Department of Physics, Boise State University), in contrast, started working on the phenomenon to study dust devils and other desert weather features that might have analogs to processes happening on other planets. "What is striking about prior research on the Racetrack is that almost everybody was doing the work not to gain fame or fortune, but because it is such a neat problem", says Jim Norris.

So is the mystery of the sliding rocks finally solved?

"We documented five move events in the two and a half months the pond existed and some involved hundreds of rocks", says Richard Norris, "So we have seen that even in Death Valley, famous for its heat, floating ice is a powerful force driving rock motion. But we have not seen the really big boys move out there....does that work the same way?"

So plan a trip!! But be sure to have plenty of fuel and water. It is a remote location - even for Death Valley.

The reception will be under the stars at a beautiful outdoor venue in Death Valley, but as Death Valley is one of the darkest places on the planet, we have to recommend heading out the night before the wedding to do your own set of stargazing. The top locations for star gazing as suggested by park rangers are: Mesquite Flat Sand Dunes, Harmony Borax Works, Badwater Basin and Ubehebe Crater. 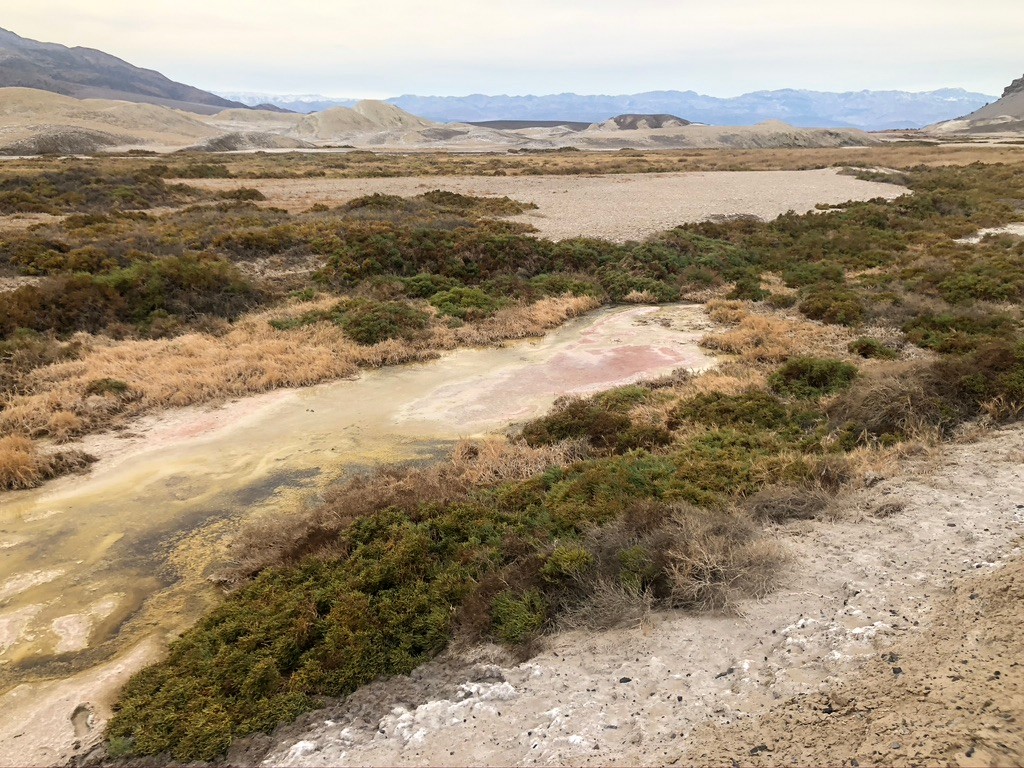 Some of the only water in Death Valley and the only habitat on earth of the Salt Creek Pupfish! You may even be able to see some in late October.

Parking: The open gravel parking area is large enough for RV's and buses.

Closest Restroom: Vault toilets are located in the parking lot.

Route: The boardwalk is open year-round, however, water only flows down to the boardwalk from November through May. The best time to visit is during the Spring (February - April) when the Salt Creek Pupfish are in spawn. Interpretive signs along the way explain pupfish behavior, their adaptations, and how they relate to other pupfish around the Mojave Desert. 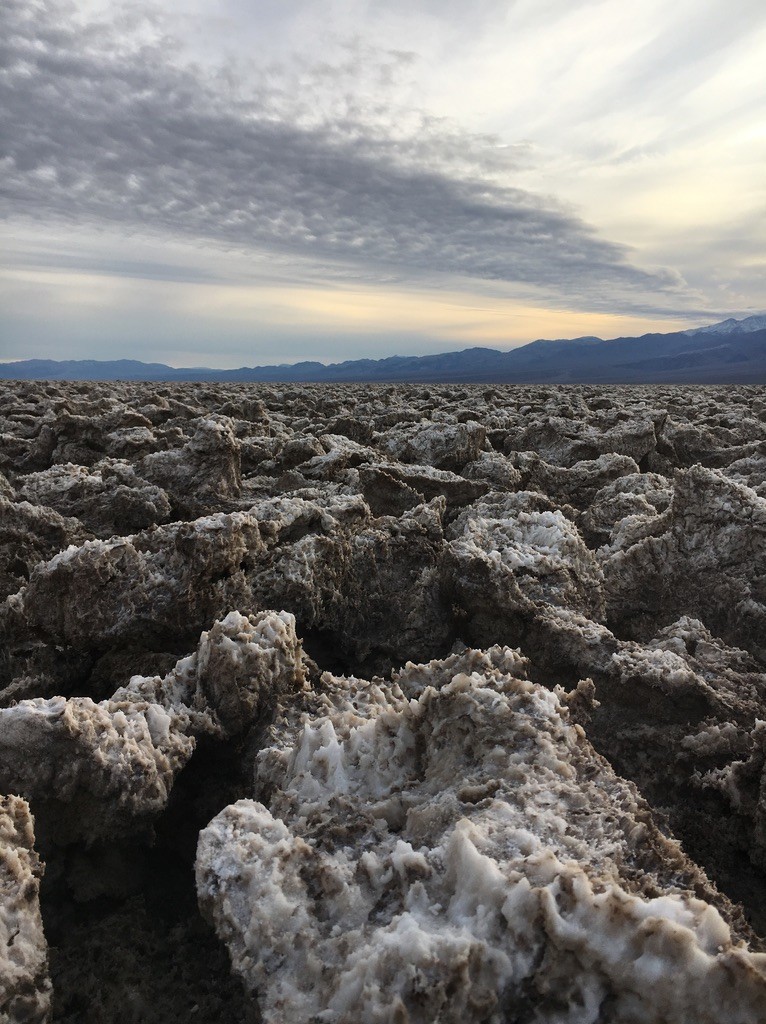 This is such a cool site. Here you'll find a huge area of rock salt eroded by wind and rain into jagged spires. In the infamous Death Valley heat, the salt crystals expand and contract in the heat and bursts making popping and pinging noises resembling the pinging of a golf balls hence the name!